The Most Common Error in Business Forecasting

The worst error I’ve seen in a business plan – and I’ve seen it a lot – is one of basic math. It is an unforced error that too many companies make.

I’m referring to the Best Case / Worst Case analysis. In theory, it is just estimating the best-case scenario and the worst-case scenario, and then averaging the two. Seems pretty simple, right?

Startups are smart enough to avoid discussing the worst-case scenario, so they typically avoid this error. But corporate innovation projects fall into this trap more often than necessary. Here’s why.

The Absence of Likelihood

Guess which one is more likely.

So simply averaging the two is shoddy math. To make an accurate business forecast, you need to weigh the probabilities of success and failure across the possible outcomes. 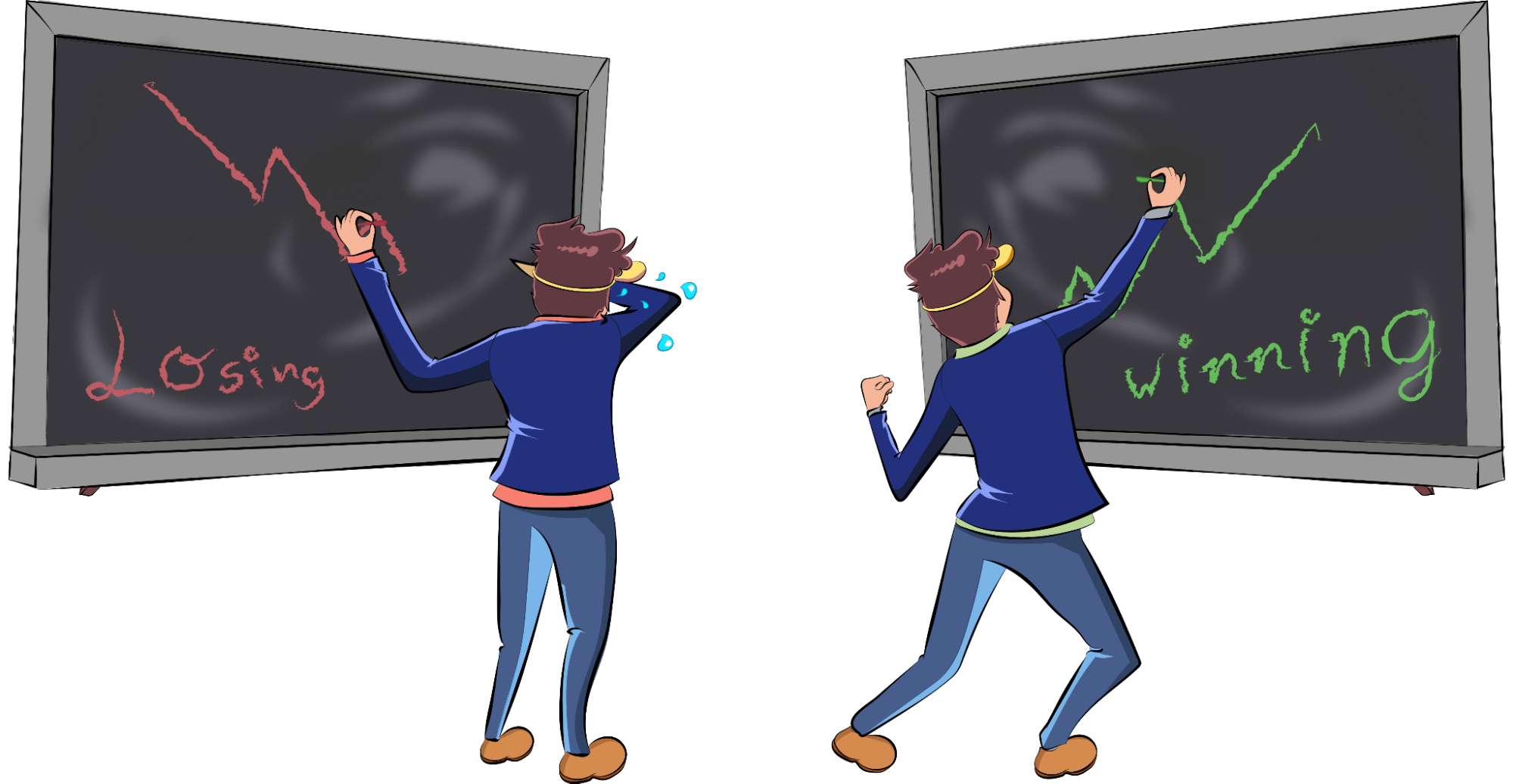 A more realistic calculation would be:

This slightly improved calculation shows that this probably isn’t a good investment. But it’s still a bad estimation because there is a huge range of possible outcomes between losing one million and earning one billion.

For simplicity’s sake, let’s also assume (beyond all reason) that the best and worst cases are equally likely, and an average of the two will be just fine from a probability perspective:

In this scenario, your $500,000 earns you $50,000, or 10%. Sounds like a good investment? If we did the math that way and simply averaged the best case and worst case, it would seem so. But this is incredibly wrong.

Even in this simple example, if we average the inputs of each scenario instead of the output, we get a different answer:

If this seems weird to you, you’re not alone. It seems like averaging the inputs and the outputs should result in the same answer, but that’s not the case. The issue is that multiplying two numbers together is not a linear equation. Increasing the inputs by one increases the output by more than one. Unfortunately, human brains are very bad at non-linear equations, which can make your business forecasting useless.

We can understand how this works with a simple example.

If I roll 2 six-sided dice and add them together, what would the average be?

For a simple linear equation, this is exactly right. If I take two dice, roll them about 30,000 times, and plot the number of times we get each result from 2 to 12, we’ll see something that looks like the bell curve we might remember from statistics class. 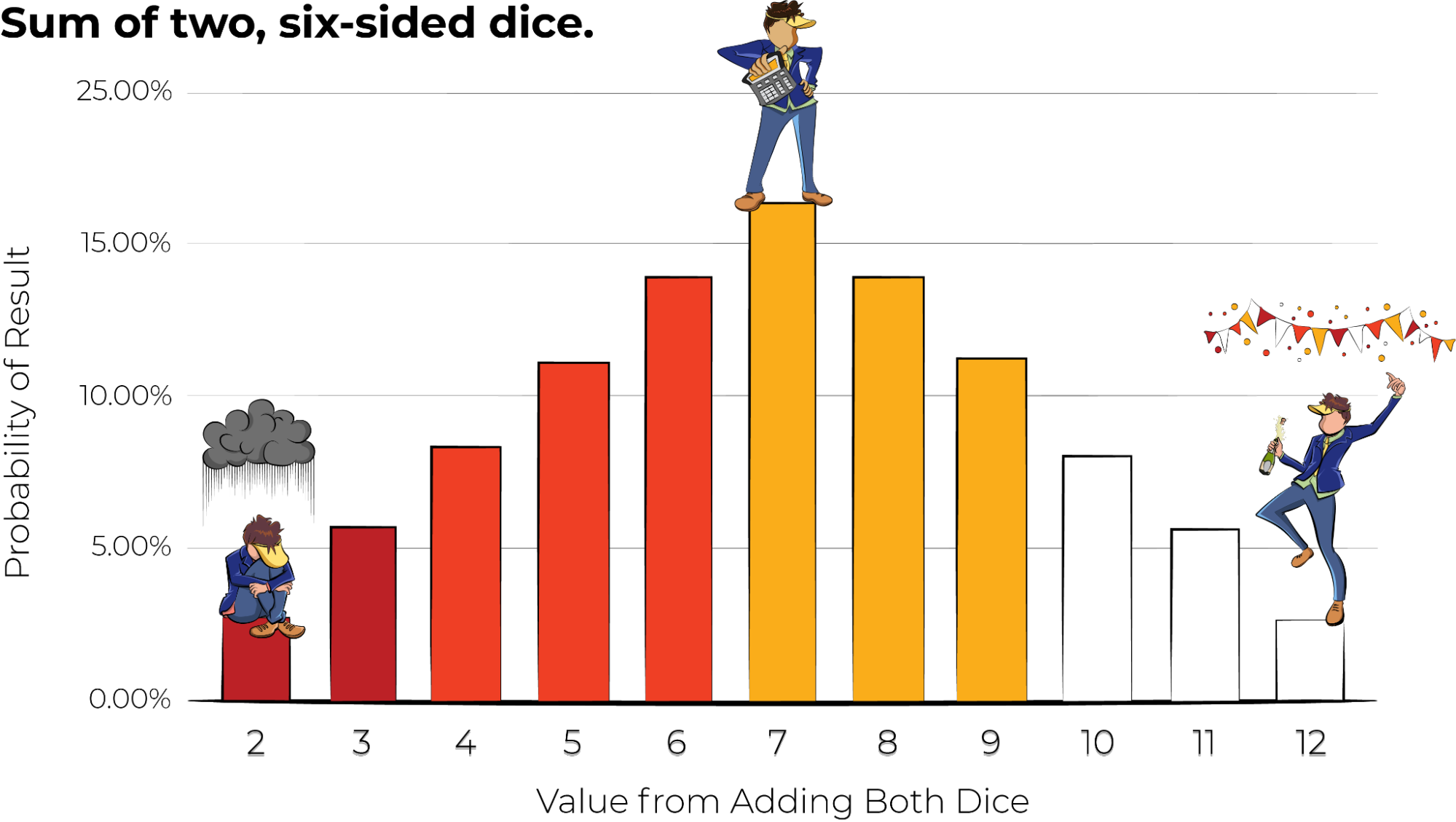 The chart looks completely symmetrical. The most likely outcome is 7, and the best outcome (12) and worst outcome (2) are equally likely. So our best-case / worst-case approach works quite well here.

Now, if I roll two 6-sided dice and multiply the output, what would the average be?

Using best-case / worst-case approach, this would be:

But if I roll the dice another 30,000 times and plot the results, we see something quite different.

This chart looks flat-out weird. It’s not symmetrical, and it doesn’t look like anything we remember from statistics class. It even has gaps.

This makes sense, because there’s no two numbers between 1 and 6 that you can multiply to get a number like 7, 11, 13, and so forth. This equation is very non-linear. The most likely result is either 6 or 12, and if we calculate the average expected value, it would be close to 12, not the 18.5 we predicted with our best-case / worst-case approach.

Rule of thumb: If your business model has even a single multiplication, division, or exponent, averaging the best case and worst case is going to wildly overestimate the ROI. Click To Tweet

Since every business case uses multiplication, division, or exponents, it should not be shocking that most business cases wildly overestimate the forecasted ROI.

How is such an obvious mistake possible? No finance department would ever make this mistake in their business forecasting, right?

It’s true, a well-trained finance department is not going to fall for these types of math errors – if they actually look for them. But the examples above are simple. Real business forecasting spreadsheets can include dozens of variables, and are given to innovation teams with zero financial training.

Finance teams and executives often don’t have time – or don’t bother – to drill into the details of a business forecast and see how they are calculated. They simply look at the output. So if somewhere in that spreadsheet, someone has taken a shortcut and done a best/worst-case average, that error is hidden in the final result.

Garbage in, garbage out.

A better approach to calculating the expected outcome of a business case is to average the inputs. This will prevent the overestimation of the best-case / worst-case approach we get when we average the outputs.

But a more nuanced approach is to just roll the dice. As we did above with our pair of dice, we can simply throw random numbers between our best and worst cases and see what actually happens. This is called a Monte Carlo Simulation.

Using this approach, you can not only figure out the expected value of a business plan, but can also calculate the likelihood of achieving a minimum revenue target that is above your investment level. In other words, you can calculate the odds you’ll lose money.

You can even do fancier things, such as calculate the value of running an experiment to reduce the level of uncertainty in one of the variables. You can even tell which variable is the most important one to focus on. In other words, you could tell your innovation team to focus on experiments to determine the retention rate of your customers instead of messing around with the home page design.

If you want a deeper dive on the value of information, check out Douglas Hubbard’s book How to Measure Everything, and see how properly calculated data can make your decisions for you. Math can prioritize your product roadmap more than a RICE score ever will.

How Learning and Development Can Create a Culture of Innovation

An innovation-minded learning and development program should be a continuous exercise for any organization that wants to foster an innovative culture. 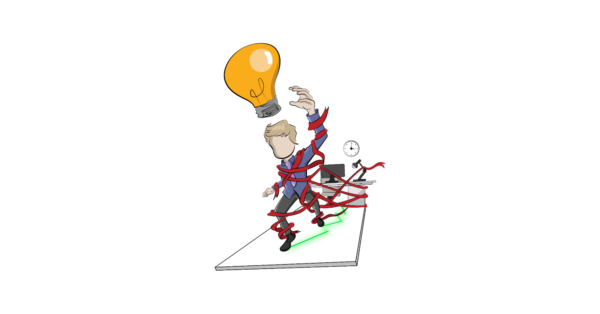