When I last left off, the product/market fit side of the intrepid Puppies-as-a-Service Business Model Canvas was done.

The (somewhat dubious) plan is to rent adorable puppies to heroin addicts (with a heart!) who would like to pick up chicks and with a no poop experience. I’ll rent these puppies out of the back of a pedicab delivering excellent customer support via an awesome customer support desk which is really just a cell phone.

(If you’re just tuning into this marvelous example project, you’ll probably need to recalibrate your brain to my sense of humor by watching an episode or two of The Thick of It) 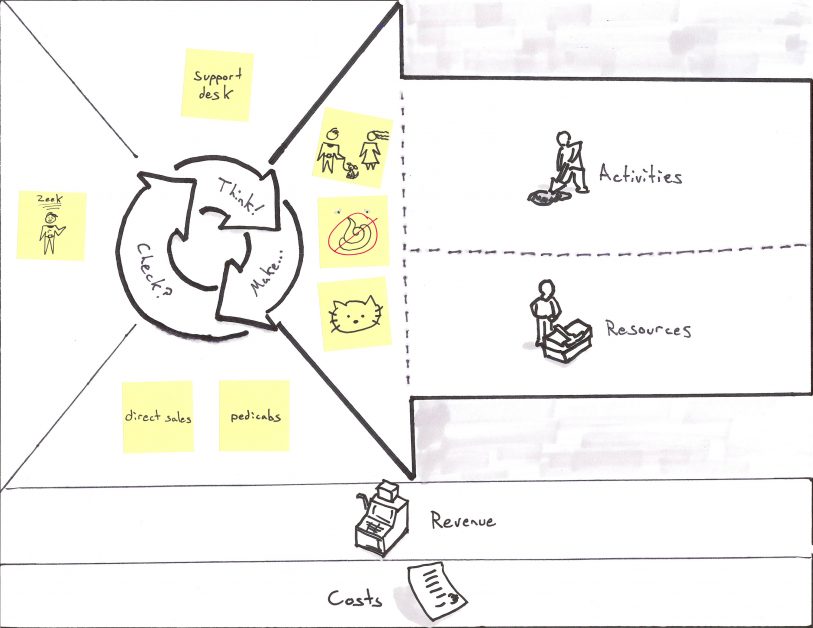 Since I have a general notion of what our MVP is already, it’s time to figure out what I need to actually do in order to provide that value. But instead of doing a Dump and Sort like I did with Channels and Relationship I’m going to approach Activities backwards. (A standard Brain Dump and Sort will also work. Go backwards for more physical productions with a clear production timeline.)

I know the Value Proposition we want to provide, so what steps do I need to do in order to provide that value?

(Note: Osterwalder proceeds by dealing with Resources first in his book Business Model Generation. That makes sense if you’ve got a heap of resources and you’re trying to figure out what Activities you can perform with them. Doesn’t make a lick of sense here so we’re starting with Activities.)

Of the three main Values we are focused on, two are pretty much immediately generated by handing over the puppy. Girls will instantly flock to Zeek (our persona) and Zeek will be so overwhelmed by the female attention he won’t have time to screw it up by kicking his arch-nemesis…the cat. (I know…that’s a pretty flimsy arch-nemesis, but at least it’s not that baby with one eyebrow.)

So the main thing we’re going to have to do is make sure the puppy doesn’t have to poop while Zeek is renting. So let’s make sure that we have a large variety of puppies available. We’ll feed them at different intervals, we’ll walk them regularly, and hopefully they’ll poop at different intervals so that we’ll always have a fresh puppy available for Zeek. Then we’ll clean ’em up with a wet nap and hand one over to Zeek.

So we’ve identified a few Key Activities already going backwards: Puppy clean up, puppy walking, petting (gotta keep that puppy in a good mood!), and feeding (bacon of course!). But where are all these puppies going to come from?

Well boys and girls, when a mommy and daddy dog love each other very much they have a special kind of hug called “doggie style” and then a stork brings a puppy.

So let’s put all this on our canvas: 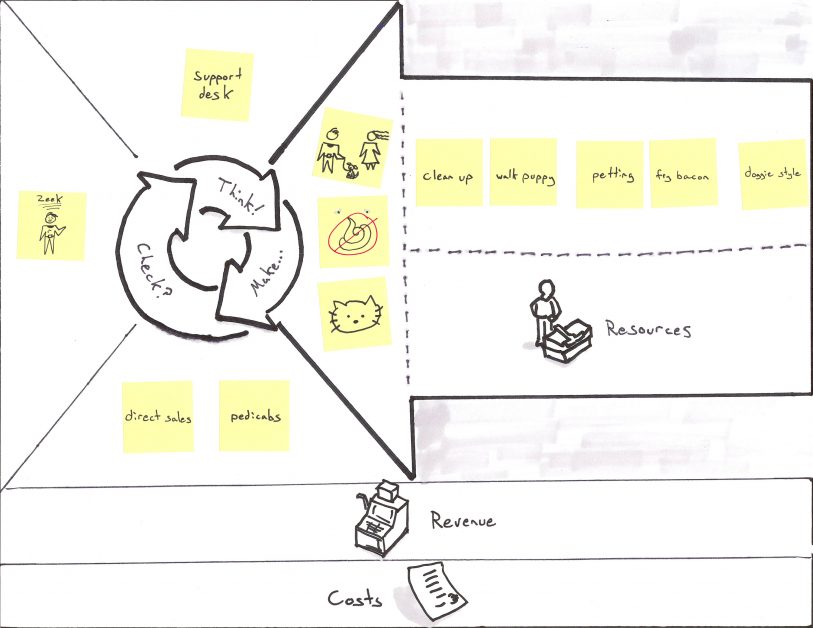 You’ll note that if you read the activities from right to left, it looks suspiciously similar to a production line. Now I need to figure out how to support our activities with…

Since I know what activities I need to perform, this is actually very straightforward. I’ll just look at our Activities and place any Key Resources directly underneath the Activity in question.

(If an activity requires more than one resource, I’ll place them vertically.)

I won’t need a lot of Intellectual Property, Know-How (how hard can it be to pick up after puppies?), or other intangibles such as lines of credit. Instead I’ll need a bunch of physical things. I’ll need a lot of newspaper for clean up, dog walkers to to walk the puppies, a ton of bacon, and some mommy and daddy dogs.

Of course, I’ll also need some pails to keep the puppies in when they’re “in stock” and a big red stapler to make sure the puppies don’t wander off. 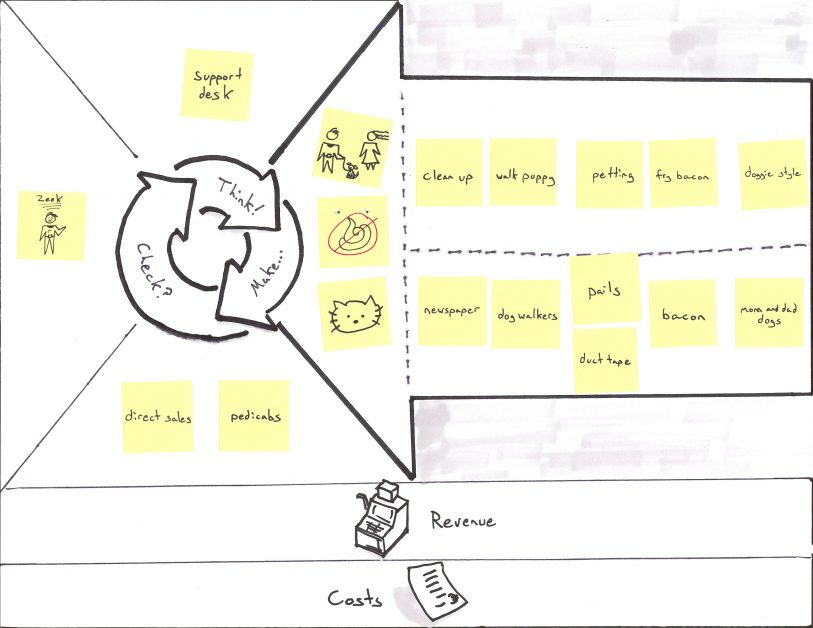 Now that I have an initial hypothesis for all needed Resources, I can start start making Cost estimates. I can do this exactly like we did our Resources. I’ll look at every item and drop down a cost item underneath it. This ensures I really think about each aspect of our business model and how it effects our Costs instead of just trying to think of everything all at once.

The biggest cost will probably be my PaaS CEO salary to do sales and run customer support since I need to pay my rent (no mom’s basement for me!) and I need the occasional sushi dinner. This is a known cost and it’s fixed so I’m just going to write down the expense per month since I want to run my MVP for a month to get a sense of the market. Let’s say $3,000.

Sure, I won’t be dating much on that budget but I’ve heard that the internet is a good substitute product for that.

Many of my other costs are per puppy costs (a.k.a. variable costs) such as pails, bacon, duct tape, and newspaper. So I’m tempted to write this in per puppy terms, but I’ll stick to monthly so everything is comparable. Again, these are known costs, so I’m going to write down the actual costs where significant. I can get newspaper, rusty pails, and duct tape for next to nothing so I won’t even note those.

Some of my costs are relatively scalable such as mom and dad dogs which can crank out a litter of 3-10 puppies twice a year so the cost per puppy goes down as production goes up. (IVF for puppies anyone?) Since this is early on, stud fees are going to be significant, so I’ll note this.

Lastly, I also have fixed costs like the poor intern who is going to clean up after all these dogs. I’m sure as hell not going to do it.

Fortunately, interns get paid in ramen which is cheap. 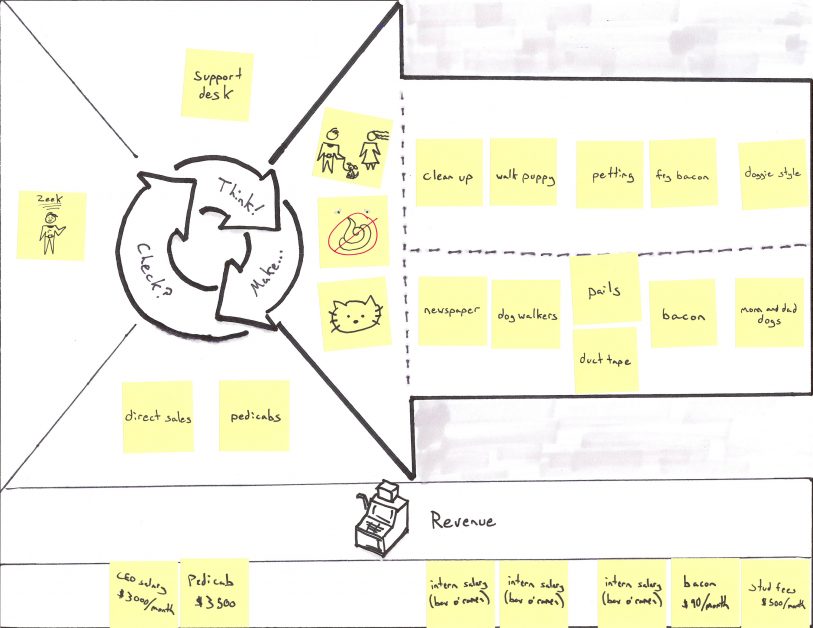 Like a dubious internet entrepreneur, I’ve left revenue for last.

Not because I don’t think it’s important, but because I think it’s easier to dream about Revenue after having an understanding of Costs. It gives me a sense of scale and puts the fear of starvation in me, so I’ll look for every opportunity to monetize the model by again looking under every single aspect of the business model for opportunities.

I could do a whole dump and sort for each section, but I’ll restrict myself to the obvious ones here. Under the customer, I could charge a puppy rental fee and I could have an overdue puppy charge. I could charge for premium support if the puppy encounters technical difficulties.

Lastly, if I wind up with extra puppies, I could try and sell them back to breeders as adult dogs. So now my canvas looks almost too full. 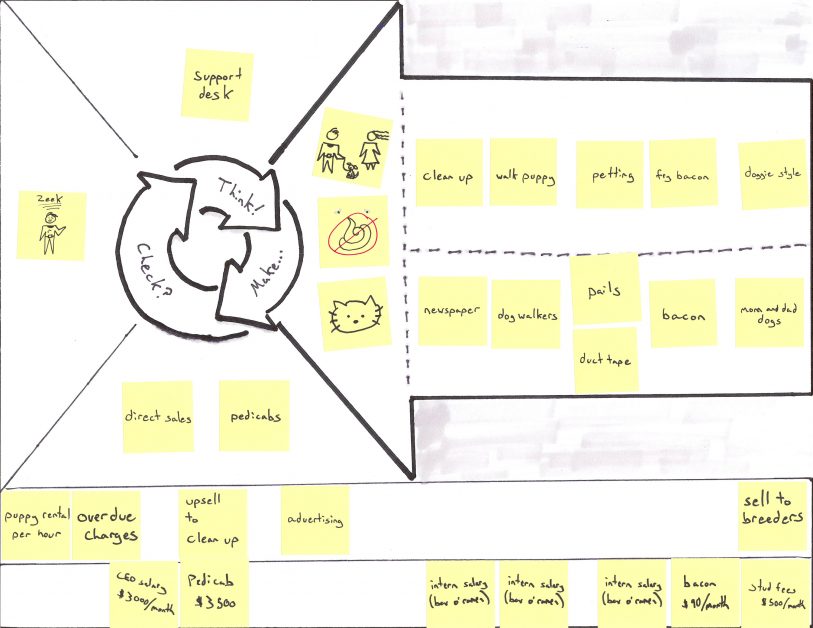 Now I have a ton of ideas based on my initial MVP hypothesis and a something is clear…there are issues.

Depending on my tolerance for risk, this isn’t going to work too well. But that’s ok, because I know that

Even as a solo entrepreneur, it’s time to get a second set of eyes and start editing this model down to something manageable….next week!

Lean Startup is not easy. It sounds easy when you hear Eric talk. "I'll put up a launchrock page! Now I'm a Lean Startup." Sorry... it doesn't work like that. 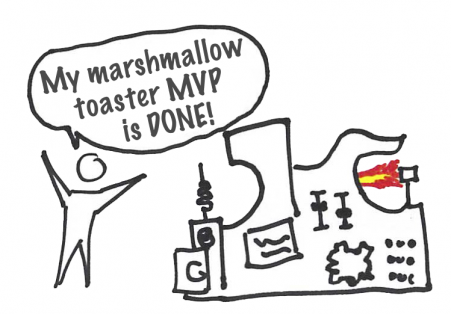