Why is Cyber Squatter a Bad Word? Value Creation In Entrepreneurship 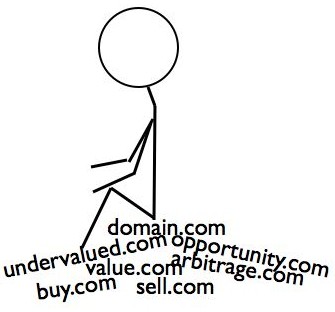 startupSQUARE attracted (and still attracts) a lot of interesting exchanges. In my habit of responding to as many as possible I often say stupid things. Whether it’s on-line or in person, it’s a habit. What is value creation?-its a primary aim of any business entity.

One exchange recently caught me by surprise. I was approached by someone (as usual, name redacted) who called themselves a “domainer.” Not being familiar with the term (I’ve been out of the country for a while) I asked,

“What is a domainer?”

The answer is someone who buys and sells domain names in the hopes of capturing some of the appreciating value much like a stock broker. When this was explained, my immediate reaction was,

Ah…cyber squatter is the term I’m more familiar with!

Apparently this term is viewed as very derogatory and I offended him. I think that’s really interesting. It seems clear from the exchange that in his view I had basically insulted his entrepreneurship. A subsequent blog post which popped up later explained that domainers as a whole view themselves as undervalued and suffering under a stigma. Lucious Fabrice goes on to say in the post that domainers are lacking “much-deserved recognition.”

So firstly, sorry dude. My bad.

The Value of Entrepreneurship

Now on to the part that piqued my curiosity… I’m sure this will offend even more domainers with this, but I’m willing to risk offense for something interesting. The exchange made me think about why I associated the term cybersquatter with domainer.

Technically, a cybersquatter is attempting to profit off of someone else’s trademark. That’s not what most domainers do, and that’s not how I thought of the term. I associated it with occupying a space that others want to use productively. In other words, a squatter is eliminating the possibility of value creation, but capturing value for themselves.

An example in the real world relatively close (but still distinct) to the original usage of the term squatter would be a rent controlled apartment occupied for 20 years. The tenants are not technically squatting, but the apartment could be rented at a much higher price. Occupying a space at less than market value is legal, fair, and entirely appropriate in many many circumstances. I am not saying otherwise.

However, some of the value that the apartment represents is wasted as the landlord has no incentive to maintain the apartment and negative externalities are created by market distortion. The tenants gain, but as a whole, value in the system is destroyed in the degradation of the resource.

Domainers are acting in a perfectly acceptable market fashion, capturing value for themselves by trading domain names in much the way we buy and sell stocks. It’s probably a great way to earn a living if you’re good at it, just like day trading can be if you’re good at it.

(I’m not good at either. I pick horrible, but funny, domain names and never pick the right stocks.)

In that way, I recognize domainers as having the same value as I recognize stock brokers. Which is to say, I respect the skill, but have no interest in the job. It lacks something that I consider essentially entrepreneurial.

Given that 9 out of 10 startups fail (including my own) it’s clear that you’re probably better off being opportunistic than being entrepreneurial. But it’s not for me.

Being a stock broker is quintessentially opportunistic. You buy low, sell high. If you see an opportunity for arbitrage, you take it.

Does that make every stock broker an entrepreneur? No. Not even if they trade for themselves.

The reason why is that they don’t create any value. They just move it around and take a piece for themselves.

Stock brokers provide a service which many who can’t be bothered to trade their own stocks find very valuable, and rightly so. But they don’t inherently create value in the same way as someone who creates a product, a service, or a new business model.

Even if that product is as silly as the Flowbee, that’s value creation. Even if it’s not a new product, but a better way of distributing a product (FedEx anyone?), that’s creating value. Even if the product is absurdly packaged financial derivatives (which in the long run destroy more value than they create,) the intent is to create value. In that way, yes…even evil Wall street execs can be entrepreneurs.

I’m sure there are entrepreneurial domainers.

Whoever the first guy to start serving up ads on an otherwise unadorned domain was an entrepreneur, as was whoever invented GoDaddy’s brilliant parking service. Those great entrepreneurs recognized an opportunity to create value by opening up new advertising space where none existed before. I have a lot of respect and interest in those guys.

For the average person buying and selling domains, I still respect the skill required, but I don’t respect the entrepreneurship. There is no value creation and it’s certainly nothing new.

It is the same if you bought a store on Madison avenue in New York, and instead of building a business, you just hold onto it for a couple years. That destroys value. It’s eliminating the possibility that an entrepreneur can come along and build a business there. It’s wasting the time of everyone who has to walk past it to get to the real stores.

Instead, many people do just put up gaudy ads. Can you imagine a gaudy ad for discount luggage entirely occupying a store on Madison avenue? What a waste! Does it make money? Sure, but what a waste!

On the plus side, it does capture value and it pays the bills, which is more than I can say for some of my ventures. But I don’t find it sufficient and I think there are enterprising people out there that can do better.

I’m not sure what the next form of domaining will be, perhaps you can rent out domains by the month to drive additional traffic to an existing entity. Perhaps putting landing page surveys to investigate market demand and charge entrepreneurs for the market research. Perhaps there are more interesting ways to finance a domain purchase while retaining the registration as collateral.

I don’t know. All of those sounds better than parked domains to me.

I think it’s a shame. I think there’s more interesting things to be done before “achieving much-deserved recognition.”

My bad…sorry for insulting the world of domainers. I don’t think cybersquatter is a bad word and domainers obviously have skill.

But no “much deserved recognition.” Not yet at least.

P.S.: Lucius, thanks for saying that I have “a massive iceberg of impressive credentials.” I thought my resume was looking a bit weak to be honest.

Also read about “In a World with No Technology…”

Market Validation - How do you validate your startup idea with customers?

If the customer doesn't start complaining for the next fifteen minutes, they don't have a pain point. The length of time a person will complain uninterrupted is a pretty good proxy for the amount of pain they're feeling.