How should we react towards customer pains?

I have long held the belief that entrepreneurs should stop talking about abstract solutions and frame their pitches in terms of solving real problems, but I was wrong.

They are in no sense real. You can’t touch them. You can’t see them or hear them in and of themselves. They certainly don’t smell or taste like anything in particular.

They are not ontological entities.

And here’s the biggest problem of all (pardon the recursiveness)…

This topic has come up twice in two days. First at Lean Startup Machine and then at #agileUXnyc. It’s the idea that an entrepreneur’s job is to find a problem/customer pains and the propose a solution. Lean Startup methodology dictates that you should never build a solution for customer pains and then go looking for a problem. Josh Seiden’s talk at #agileUXnyc also emphasized that.

But problems are nouns, and that’s a bad thing.

It is an uncomfortable holdover of platonic philosophy that the Western world treats abstract concepts and relationships as entities that can be manipulated as independent objects. But they’re not independent. They’re intensely contextual. Here’s my definition:

A problem is an active relationship between a human being and a situation that triggers a negative emotion. Click To Tweet

When I say active relationship I am speaking specifically of a relationship that extends over a period of time.

If you stub your toe and have an instant of pain, that’s not a problem. It’s an event. It only becomes a problem when the pain lasts an extended period of time. Then you’ve probably broken your toe.

If you’re not in pain beyond that instant, then you don’t expend any effort to reducing the customer pains. You never look for a solution.

If the customer isn't actively looking for a solution, then they don't have a problem. Click To Tweet

At this point, many will object to my definition. Mark Birch correctly states in his post on implicit problems

…you have people that refuse to think of something as a problem until they actually see the solution with their own eyes.  It is in that moment of truth that they realize that there is indeed something better.

It’s certainly true that there are inefficiencies in the world and that these can be uncovered and turned into opportunities by an intrepid entrepreneur. I do not dispute that. I am using a very strict definition of “problem” to illustrate a basic point:

It is more costly to convince someone they have a problem than to target an early adopter who is keenly aware of their pain. Click To Tweet

The traditionally clever marketing and sales person can convince Eskimos to buy ice cubes and occasionally rational consumers to buy pet rocks and vitamin water. Marketing can shift an efficiency into a problem and a useless luxury into a burning need. It’s the sad truth that its the same part of our brains that get triggered when we “need” a new $500 pair of shoes as when we need a new tire because we have a flat. (Buddha was on the money with that noble truth.)

But regardless of whether you are creating a luxury or an efficiency, there are early adopters who are actively seeking solutions. They are the trend setters looking for new designers offering something that Madison avenue does not. They are the IT managers deep in the bowels of a monolithic SAP installation trying to tweak the ERP module.

Those are the people that we call innovators and early adopters because they are willing to try new things in order to solve what is to them an active desire/pain. In other words, they have problems.

The early majority won’t have a problem until you either market to them (thus creating awareness and a negative emotion in the customer’s grey matter), or perhaps they see the early adopter strutting around with those fancy new shoes and get jealous.

The great thing about early adopters is that they are actively looking for you. They can be targeted with Google adwords because they’re actively plugging in keywords trying to find a solution. They’re out on the streets looking through back alleys and used clothes stores for a trendy neck scarf fix.

All you have to do is be there.

They’ll put up with a half-baked solution with bugs. They’ll send you feedback because they love being listened to. They’ll become evangelists and pimp your product to their friends.

So if you’re trying to innovate in a brand new market and you find yourself saying that “everyone” will want your product once they see it, you’re probably solving a problem that no one has. You probably have no clear customer or early adopter target. You’re probably desperately pitching VCs because it will take tens of millions to bring your solution to market. (Anyone want to buy a Segway?)

Instead of burning your life savings on marketing, try finding an early adopter who is actively looking for a solution.

It’s All in Your Head

There are added benefits to focusing on people rather than problems…

…your product becomes an experience.

(I’ll talk about that more next week.) 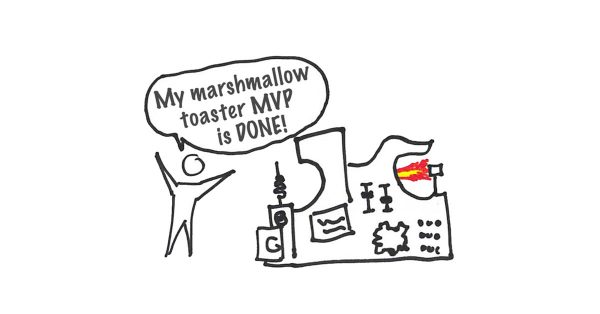