At the risk of rehashing an argument, there is an ongoing misconception that creating a company under a lean startup approach is incompatible with a big entrepreneurial vision. Paul Higgins recently published an article in Entrepreneur Country Magazine based on his blog post again suggesting that the lean and big visionary entrepreneur were incompatible.

Some of the reasons were worth thought and response:

Customers Don’t Know What They Want

Henry Ford allegedly once said, “If I had asked people what they wanted, they would have said faster horses.”

So if customers can’t be trusted to know what they want, what hope is there for building a company on ‘lean principles’ through experimentation and constant customer feedback?

This quote is often thrown in the face of the lean startup advocates, but it is hugely misunderstood. No one in their right mind says you should do what the customer tells you to do. You don’t go out and build faster horses…instead you listen for the real need.

Customer: My horse doesn’t go fast enough
Entrepreneur: Why do you want to go faster?
Customer: It takes a long time to get to the supermarket.
Entrepreneur: Aha! No need for a faster horse…the key is faster transportation. Or alternatively, some sort of home shopping network powered by a series of interconnected tubes.

Proponents of ‘lean’ would say that having a vision (Visionary Entrepreneur) – as Ries calls it, a “true north” – doesn’t stop you testing user behavior in small batches. Twitter’s use amongst friends and family in its early days was said to be wildly addictive…

But I’d argue that no user experience within a small, like-minded group of Twitter fans can prove much about the likelihood of it becoming a global communication and publishing standard.

Admittedly, the only thing that’s going to conclusively prove that a product can go global is going global. So I would tentatively agree with the second statement, but that says nothing about the value of early testing in a sample population.

Twitter is a great example of this. Had the founding team not tried Odeo’s podcasting concept and flailed, they never would have bothered with Twitter. Evan Williams and Biz Stone would have perhaps continued to build and build for years before releasing to customers and figuring out it was a waste of time.

Releasing the product early, while they still had time and cash to try something new, allowed them to succeed after what could have been a catastrophic failure.

The harder they are, the better. Then if you still see some sliver of an early adopter community saying, “Hey…this thing is cool…” now it’s time to buy a year’s worth of ramen and buckle down for some work.

So if you’re going to do a lean startup, go out there are build a test you can fail. You learn nothing by creating a test you know you’ll pass.

Minimum Viable Experience: User Experience is Not a Feature

Is anyone else out there sick of signing up for on-line products that don't do what they promised? "It's only an MVP" is a poor excuse for bad user experience. 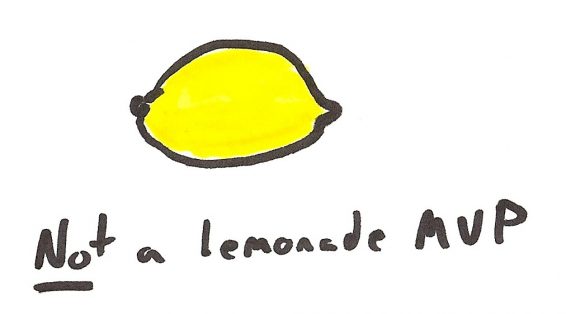