Motivations are unimportant if you happened to be B.F. Skinner. But since he’s dead let’s assume you’re not him. Before we can talk about customer development, here’s the obvious question: Why do you want to start a business?

Let’s start off topic with a ridiculously simplistic dichotomy: Fight or Flight

Those are the two basic choices we all have when faced with a conflict situation and it’s deeply ingrained in our physiology.

Even when faced with something as non-threatening as public speaking, our basic instincts can take over and flood us with adrenaline. Our instincts tell us we have to fight or run away. But as in so many modern day stress or conflict situations, fighting is useless (you cannot punch out a public speaking opportunity) so we generally go for the second option: escape the situation.

Run away! Run Away!

We can choose not to accept the speaking engagement, we can (consciously or not) miss our ride, feed our speech to the dog, or otherwise chicken out. We can avoid this situation and any other.

We choose not to discuss our problems with our co-workers, spouses, or lovers. We can be sullen and withdraw. At the extreme end of the escapist impulse, we can distance ourselves from our own lives by building a wall of alcohol and drugs between us and everyone else.

We can convince ourselves we don’t care. We can simply leave.

There are situations where running away is the right choice. When faced with a half dozen rifle toting grizzly bears with a penchant for human flesh, the correct choice is to run. But more often than not, we choose flight because we don’t see how we can possibly fight. If the bank has lost your wire transfer, yelling gets you nowhere and neither does yelling at the teller. Most times, stapling that memo to your asshole boss’ face is a poor choice of action.

There are other options.

We can choose to take that burst of adrenaline inspired energy and instead of fighting against our problems we can choose to partake of a solution. The most successful people I’ve met do this with aplomb. Terrified or not, they will approach a crowd of 1000 people and burst onto the stage brimming over with energy. They’ll speak with a passion and conviction that will convince their most antagonistic critic. They’ve changed to dichotomy from customer development- fight or flight to escape or partake.

Why are you starting a business?

I think most people start a business for one of those two reasons. They’re either running from something (i.e. a bad job, a shrinking industry, stress, etc) or they have a fervent desire to experience and partake more broadly of the world.

They want to experience more, engage with other people, find solutions to problems. They want to travel, engage in esoteric sports, and most importantly, they love to talk to people with a different point of view. This second type of person has taken their fight instinct and channeled it into a creative and productive force.

It’s this second type of person that I want to be involved in.

Those are the partners I want. They are the ones that aren’t interested in building something arcane in a basement for a year until it’s perfect. They are out of the building actively engaging with customers, trying to understand problems and build the right solution.

They dream about how to improve their products and when they problem solve they never use the word “but.” Instead, they’ll use the word “and.”

They’ll take one idea and use it to brainstorm another idea and another and another until you’re sitting on a mound of possible products waiting to be invented.

We don’t all start businesses for the same reasons.

I won’t argue that any one of these goals in more or less important than any other. There’s plenty of other people who will argue that. I am suggesting that it is important that we know what our motivations are, and align our actions with that.

Moreover, the other stake holders have to be in line with that motivation or you’re going to have problems. If your investors are out to make money (hint: they are) and you’ve started a business because you just didn’t like working for your last boss, that’s ultimately going to be a problem.

I won’t pretend that I haven’t run away from an uncountable number of problems.

I’ve had jobs I didn’t like, relationships I didn’t want to commit to, and large, wall like individuals that I realistically couldn’t beat in a fight. That’s ok.

I’m talking to customers that hate my product to make it better.

I’m engaged in the process and I’m learning customer development.

I think that’s what customer development is about. So let’s all get out of the building and start talking to the world.

The Taxonomy of the Lean Startup Pivot

I like to think at least five moves ahead in the five most likely futures. So I decided to make a list of my potential product/market pivots. 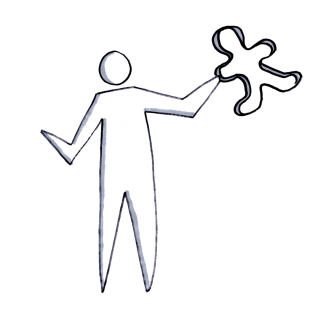