Minimum Viable Founding team- Dharmesh Shah often puts out some great articles so I was pleased to read one on Choosing a Minimum Viable Co-founder. Having spent a lot of time on that subject while running a site dedicated to helping people find co-founders, I enjoyed this sentiment:

I only wish the emphasis was more on the people and not “the company” or “the idea.”

I have always found the pervasive quest to find a rockstar business guy or a ninja developer to be ridiculous, but the pursuit of someone who is “committed to the idea” is far more insidious because it’s less obviously flawed. Why wouldn’t you want a co-founder who’s in love with your idea?

You won’t be working on your big idea

The biggest issue with the big idea is that you rarely get to work on it and even if you do, the details of it are far less fun that sitting around your living room on your third or fourth beer dreaming about how cool the world will be and how much money you’ll make.

You’re a big data engineer! You’ve ready to build infrastructure to serve millions of people! You’re going to change the world and bring peace to cats and dogs!

So what are you doing on a day to day basis?

Optimizing the color of the signup button.

Reading the can-spam act to make sure you’re not about to be sued.

Drop the confetti and ballons.

Let’s face it, there is a lot of tedium involved in a startup. The big dream is great, but you’re going to be focused tiny baby steps. So if your co-founder is only interested the grand scheme of things and can’t deal with the journey, find a new co-founder.

I hate to disagree with the Supreme Court, but the concept that companies have the exact same rights as people is the stupidest concept I’ve ever heard of outside of the Jimmy Dean Pancake & Sausage on a stick monstrosity…now with chocolate chips.

When a Facebook employee says they’re committed to Facebook the company, they’re lying. (More to themselves than to you.)

They’re probably committed to their co-workers, their boss, and of course…Mark Zuckerberg. You can bet that if Mark Zuckerberg went up and kicked them in the shins repeatedly, their love of Facebook the company would fade as quickly as the barrage of expletives were uttered.

Of course, there are people who are deeply committed to inanimate objects. But let’s put the people that are inclined to marry the Eifel tower aside. (Yep…check it out here.)

At the end of the day, your success as an entrepreneur depends upon other people. Click To Tweet

Make sure you pick the right ones who are committed to you, as a person. Because a company will never remember your birthday.

Taxonomy of the Lean Startup Anti-Pivot

Sometimes pivoting describes how entrepreneurs adapt to customer feedback. Sometimes it's an annoying buzzword, grating to the ears. 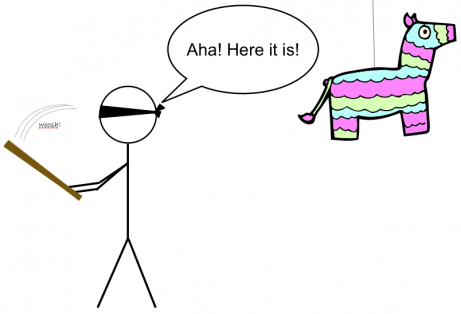