A Child’s MVP, or How Not to Build a Murderbot

It’s hard to separate home life from work life when they take place in the same room. I spend half my mornings toeing legos out of my path, dodging in-depth conversations about Minecraft, and clearing enough breakfast crumbs off the table to make a clean rectangle for my laptop. The commute is short, but the traffic is brutal.

Navigating our workload around 4- and 7-year-old boys (Tristan and Max) has frankly been a royal pain in the ass. But since my wife (Mary) and I provide communications support for innovation coaches, it’s also been an eye-opening experience about what our kids are learning and how they apply it in real life.

After 14 straight months working and schooling from home, naturally the worlds will collide. I’ve learned that bread is mostly yeast farts. Tristan turns his art into books because “Daddy’s a writer and he needs more words!” Thanks to online classes, Mary speaks fluent toddler-level Mandarin. And Max is building a Murderbot.

One of the things we’ve found most surprising is how similar parenting is to innovation coaching.

As parents, we only have two jobs: protect our kids, and teach them to make good choices. Naturally, these duties lie in direct opposition to each other.

We best protect our kids in the moment by making the choices for them. I will hold your bike while you pedal. But we must loosen those reigns and risk our children’s safety if we want them to develop their decision-making skills. You are now peddling on your own.

Making decisions for both our kids and our innovation teams will keep them safe and is less risky, but it doesn’t lead to growth. In a large organization, investing in the core business is safe. It protects your company in the short term. And most of those investments can be directly managed from the top down with an executive’s superior experience.

But truly disruptive innovation is not like that. Allowing our kids to make their own decisions (in incremental steps) is investing in the future. Allowing children the space to play, make mistakes, and explore is critical to their growth. Max wanted to build a robot butler, which would be handy, but he had no framework for evaluating the risks, which makes it harder for us as parents to let him run amok in the lab.

Just like parents, company executives must strike a balance between the core business (a parent’s guidance) and disruptive innovation (a child’s will). Click To Tweet Micro-managing from the top down prevents teams from learning, experimenting, and discovering novel approaches and business models. Control stifles innovation. Only by taking risks can an innovation team crank out a disruptive minimum viable product.

I was kidding, there isn’t a user manual for parenting. There isn’t even a money-back guarantee. But there are the methodologies of lean and agile that seem custom-tailored for the nonstop, high-risk/high-reward disruption of raising kids.

Every parent of young kids knows you have to plan ahead two hours if you want them to put their shoes on to walk next door.

That’s because they are incapable of focus. Everything in their range has that “new world smell,” and like the little innovators they are, they constantly stop to build, measure, learn, and build again.

Mary is a wizard at doing morning sprints with the kids. She asks them how they’re feeling, sets manageable goals, makes sure they have the resources to accomplish them, clarifies the metrics of a successful day, and identifies the obstacles (can’t find the crayons, grandpa’s coming to visit) that might stand in the way of them accomplishing those goals.

Most importantly, she listens to the lil’ innovators about their own ideas and how they want to accomplish their tasks.

The listening is important. Your team has to leave the sprint meeting feeling motivated to do their projects, and a sense of ownership is the best way to motivate them. So while Max has to accomplish his goal of completing two pages of multiplication questions in his math workbook, how he accomplishes that task is up to him.

Initially he did the equations left to right across the page, but soon began doing them in a chaotic pattern, just choosing problems randomly until they were all done. Then the pattern became less random. He seemed to be searching instead of just jumping around the page. He explained to me that after he did one problem, he looked around the page for the same equation so he would only have to solve it once. I suspected this was an innovation to let him do less work rather than to learn more, and that might have been his intention.

But his math skills quickly grew. I watched him closely, and realized that while he was searching for a specific equation, he was repeating it to himself — 6 x 4 = 24 — over and over through his search. Within a few months he basically memorized his multiplication tables, and even the ones he doesn’t know by rote he can easily calculate. His math skill level has jumped two grades since he’s been stuck home.

Because we didn’t tell him how to do his work, just what needed to be done, he found a better way.

Every project manager knows the importance of reviewing a project’s successes and failures to learn for the next project, usually through a retrospective, or “retro.”

In the military we called this an “after-action report.” As an intelligence analyst, I was proficient with these little babies, enjoying the challenge of breaking an exercise down to its successes and failures and identifying their root causes.

We perform retros with the kids on a daily basis, often more than once. We call it “rewind.” We had noticed that when the boys sank into tantrums, they had a look on their faces that said “How did I get here?” They seemed to genuinely want to de-escalate the situation, but didn’t know how. The lack of an escape hatch just made them more agitated.

So we launched Project Rewind. Whenever one of the kids traveled too far down the naughty path and started going off the rails, we would offer them a “rewind.” Once they realized their mistake, they could physically go back in time and handle the situation differently.

By “physically,” I mean they would have to walk backwards and cry backwards, waving their hands and making that “doodly do” sound like flashbacks in movies, throwing their tantrum in reverse to the point where they should have made a better decision. It’s always funny, acting like a pressure valve to channel that pent-up emotion from frustration to laughter.

This is not merely “give me another chance,” because we all know that shit doesn’t work. Without an object lesson, they will return to the previous path. So after our kids rewind, they have to calmly explain where they went wrong and what they should have done instead, and then are given the opportunity to walk that path.

The kids do it on their own now. Max has taught it to Tristan. It’s proven very effective at honing their decision-making skills.

We also retro the moments where they are exceptionally kind or hard-working. We stop for a moment, praise their good choices, retro what happened, and explain the consequences of those decisions.

We use the word “consequences” instead of “punishment” and “reward,” because it removes us from the equation. We want them to learn there are natural consequences to their choices — both good and bad — rather than bonuses and demotions doled out by management.

Sound familiar? Set the goal, identify the metrics, give your team the tools they need to do their job and the freedom to make their own decisions, and they will take ownership of the project. Don’t micromanage or tell your team what to think. Teach them how to approach problems and let them figure the rest out for themselves.

Every writer knows that boredom is key to creativity. The world is your input, the words are your output, and boredom is the best medium to connect the two.

But boredom is an elusive beast. And it’s not enough to just unplug. We have gotten so used to multitasking under a barrage of constant information, that even turning off the world doesn’t free us from distraction, or from subconsciously calculating the ROI of puttering around in the garden vs reading a book in the hammock.

One of my favorite principles of innovation thinking is the sandbox — a place where innovators can be creative and play with their ideas without the distractions of outcome or the possibility of failure. No pre-programmed lessons, no metrics for success, just good ol’ fashioned play.

Our parenting sandbox is literally called “Boredom Time.” The kids are not allowed to do any of their normal activities or play any of their usual games. They have to be original, making new creative outlets from what’s around them. Hence the invention of starwars-lego-smore boxing.

There isn’t a lot of structure to this practice. We don’t expect them to learn anything. We just want them to have a safe place to experiment without consequences, to focus on the experimenting itself rather than the result.

Which brings us back to the murderbot.

How Not to Build a Murderbot

When we finally stopped pretending that work and school and home were three different places, we went all-in on Project Innovation Parenting. Max was asked what he would like to invent, and we gave him the tools to plan his process. He said he wanted to build a robot butler. 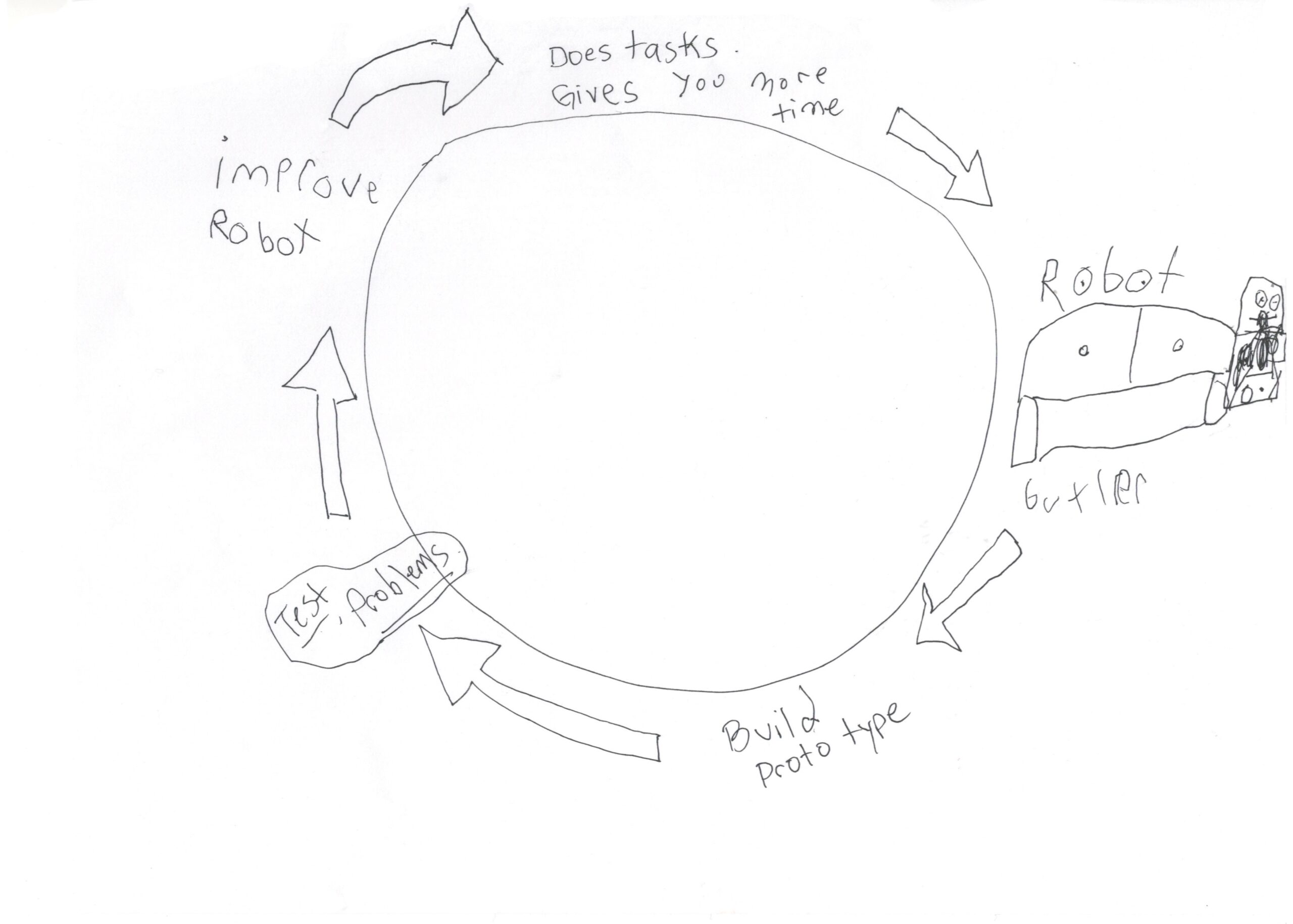 Starting with the Build, Measure, Learn loop (or a reasonable adaptation thereof), Max outlined his process in broad strokes.

He then employed Kromatic’s Innovation Project Evaluation Worksheet to understand such details as objectives, insights, and risks, which gave way to some considerations he didn’t anticipate.

One of the most important elements of project evaluation, of course, is understanding and addressing potential risks. Until Max tackled this project using the perspective and tools of a startup, it hadn’t occurred to him that his robot butler might develop a murderous agenda (he’s not yet fully versed on Asimov’s 3 Laws). 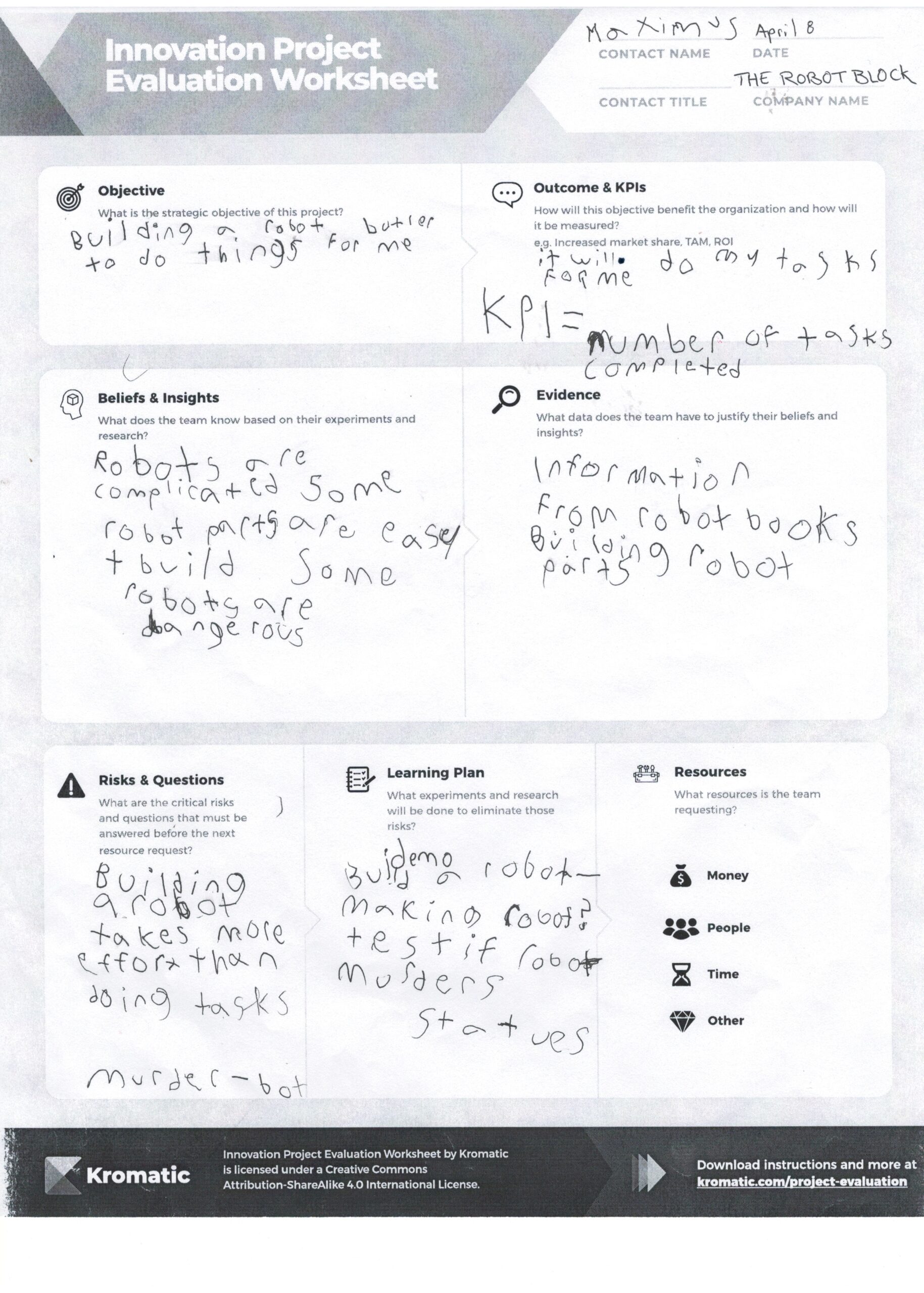 But thanks to these tools, he figured out not only this risk, but how to address it: he’s going to test his robot out on statues. If the statues survive unscathed, that will be the KPI he needs to continue building his minimum viable product.

Will the robot butler instinctively know the difference between dirt and human-shaped objects? I can’t wait for the board meeting to find out.

Want to make sure your next project doesn’t accidentally doom humanity? 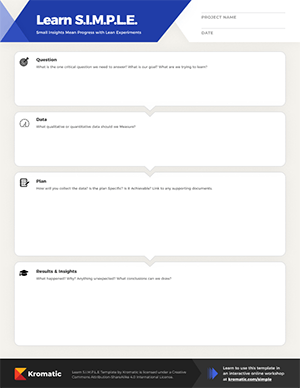 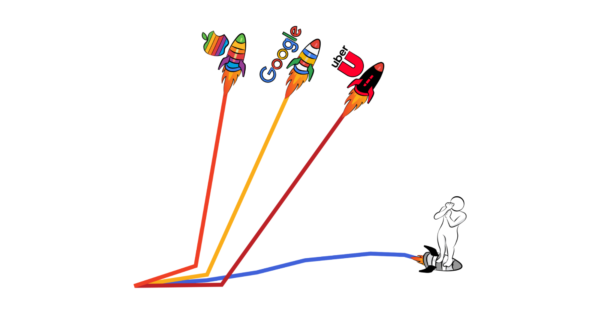 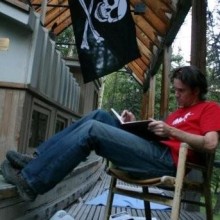 Chris Cannon is a writer and communications consultant in Vancouver, BC.